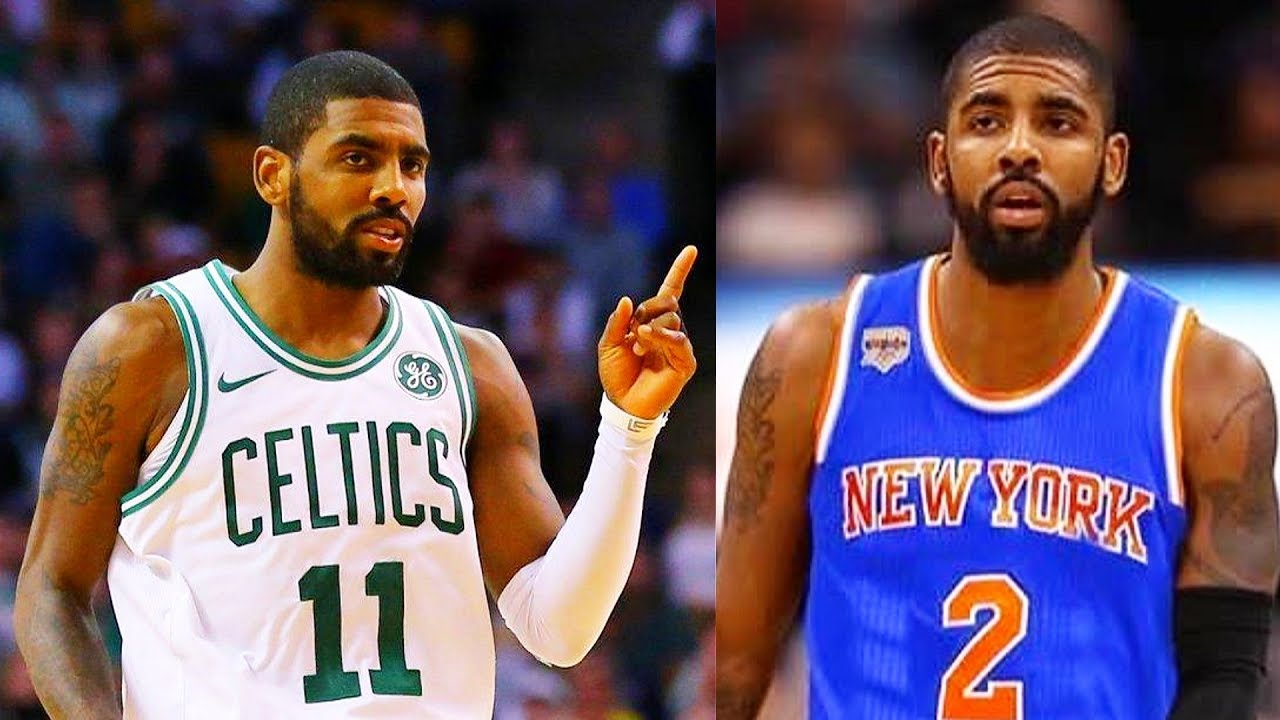 A lot of buzz is circling around the NBA rumor mill today about Kyrie Irving moving to the Knicks in free agency after the 2018-19 season. And while this rumor is nothing new, it started gaining traction around the league today following this reply to Cavaliers Guard J.R. Smith’s Instagram post asking what the chances are of Kyrie landing in New York next season: 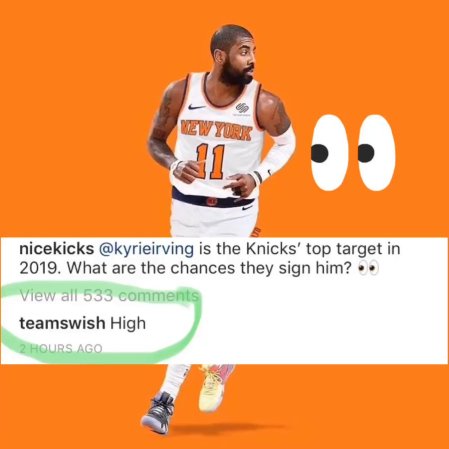 And while the always interesting and often controversial J.R. Smith could have just been commenting on his personal status at the time of this reply, it’s lit a fire to a smoldering rumor.  Could Kyrie actually leave a Celtics team that looks set up to be the best team in the East and compete for a spot in the NBA finals for the next 10 years?

Why It Could Happen

Kyrie isn’t your typical NBA superstar.  When you hear him talk about life and basketball, you can clearly tell that he’s an introvert-type of athlete that has his eyes on other things besides his basketball career. While it’s clear that he loves to ball, he also has expressed interest in other things, including a possible film career with this summer’s box office smash (kidding) “Uncle Drew,” and, according to some highly criticized (and possibly overblown) comments he made recently, “flat earth theory.” He has also shown an interest in the power of the human mind and the ability to overcome with the help of inner peace and tranquility. This excerpt from a 2016 Sports Illustrated Article by Rohan Nadkarni describes Kyrie overcoming a block of fear he had to personally deal with, and the inner power and peace he had to attain before he could become his best version of himself on and off the court.

Clearly the guy has a different mindset than the typical NBA star that wants to chase money and rings in abundance. Those things don’t seem like priorities to Kyrie. If they were, he would have stayed in Cleveland with Lebron after the 2016-17 season instead of basically forcing the Cavaliers’ hand by stating he would sit out and get knee surgery if he wasn’t traded (a surgery that Celtics fans would later discover he wasn’t bluffing about, unfortunately).  Which leads us back to the fact that it will not be a shock to anyone that deciding to leave almost guaranteed future NBA titles with a Celtics team that is young and on the rise is in the realm of possible decisions for Kyrie Irving.  Of course, there is the fact that if he goes to New York, he will almost inevitably be joining his own version of a super team with current Knicks star Kristaps Porzingis and one, if not two, other superstars (i.e Jimmy Butler, Klay Thompson). He will instantly become one of the most talented players on the most recognizable franchise in basketball. And despite the fact that the Knicks have been one the worst run franchises in sports over the past 20 seasons (thanks largely in part to an incompetent owner in James Dolan), they still play in the most influential city in the world. Any athlete that plays there has a platform and voice unmatched by any NBA team, other than the LA Lakers (and we know he ain’t going there).

Another possible reason is the consistent health issues Kyrie has had. Particularly, knee injuries that have sidelined him for significant stretches and how those injuries affect the Celtics’ long term outlook for his future. The risk of investing a possible $180 million in a 26 year-old guard who may miss time due to recurring injuries and surgeries related to those knee issues is high. And it’s a gamble the Celtics may be willing to take if Kyrie can prove his ability to stay healthy for an entire year and a playoff run. But if not, they may be willing to let him walk or trade him instead of committing long-term.

Why It Won’t Happen

Clearly there is an abundance of talent in Boston this upcoming season, and despite any rumors swirling around out there right now, Kyrie has to be excited about the possibilities for the Celtics team and their chances at winning the NBA title this year and in years to come. As currently constructed, this Celtics team is possibly one of the deepest rosters we’ve seen in the NBA in the past 20 years, with the ability to run a rotation of 9-10 players that can truly compete and give high-caliber minutes across the board. I mean, goodness gracious, look at their speculated opening day starting roster, second unit, and a little something I like to call their own version of the Warriors death lineup.

Add a healthy Gordon Hayward to this group and you get the idea.

This doesn’t even the include the possibility of defensive freak Semi Ojeleye and rookie Robert Williams providing solid minutes off the end of the bench. But you get the point, this team is very young and very talented. Clearly they will not be able to retain all of these assets over the upcoming years, but whatever final core they decide to build around (with the possibility of adding an Anthony Davis at some point) has the potential to rip off a run of 4-5 straight finals appearances at minimum. Barring something catastrophic happening, it’s almost a guarantee that this team will eventually win a title or two when the Warriors dynasty finally releases the league from their grasp. This all remains to be seen and is clearly very dependent on the continued growth and success of budding stars Jayson Tatum and Jaylen Brown, which seem to be guaranteed at this point but we’ve seen crazier things happen. It also depends on the ability of Gordon Hayward to rebound from a devastating injury.

So if you’re Kyrie, how do you turn down a future with this team? They clearly (at least in the short-term) would give him the ability to take games/minutes off and let this deep roster pickup the slack. This would enable him to save himself from almost meaningless regular season minutes on those injury-prone legs and keep him fresh for a NBA title run each spring. The team would still almost certainly always be positioned to be the either the 1st or 2nd seed in the East. It’s a win-win for Irving, and it’s a big reason why there’s a large contingent of NBA Insiders that don’t believe he’s going anywhere and that he will ultimately re-sign with the Celtics at some point this season.

Why the Celtics Will Be Fine If He Does Leave

Well duh, look at the roster I just laid out and tell me that this team minus Kyrie cannot still win the East and give Golden State a run for their money in the NBA finals. They can and almost did it last year without both Kyrie and Hayward, and with rookie Jayson Tatum looking like the boy who forgot to shoot at times in the ECF. That will not be the case with Tatum again who, in my opinion, has the ceiling of a top five scorer in this league.  If young talents Jayson Brown and Terry Rozier develop along side him, we could see the need of an injury-prone point guard who wants a max contract moving forward become an afterthought in the eyes of Danny Ainge.

There is also always the possibility that things could get crazy mid-way through this season if Kyrie decides to pull one of his famous “hesi” moves in regards to re-signing with the team. At which point trader Danny Ainge may come to the realization that the grass could be Celtic greener on the other side and decides to work a deal for Pelican’s big man Anthony Davis that could include Kyrie in return. The Pelicans would of course want more than just Kyrie back in that deal, but if you take a look at the Celtics’ draft assets, along with a plethora of young talent to wheel and deal, we could see Mr. Davis putting up 30-20 numbers in Celtics green by next February. This will all be very contingent on both how confident Danny Ainge is that Kyrie will re-sign at that point in the season and how reluctant the Pelicans may be to make a move that involves Kyrie with no long-term commitment.

But regardless, this Celtics team will be a serious NBA title contender this season and possible dynasty for the long-term. You have to think both Kyrie and his agent will come to the realization that this is something you want to be part of and re-sign at some point this season. They have to know not to push the limit with Danny Ainge. He would rather trade Kyrie for a 2037 Brooklyn Nets first round pick than lose him in free agency.  We’ll all have to wait and see what’s truly going through the mind of this introverted NBA star when it comes to decision time. But one thing’s for certain, and that is don’t believe anyone who tells you they can accurately predict what his final decision will ultimately be. And don’t be surprised if we see Kyrie Irving in Knickerbocker orange and blue this time next year.