Article By Ken “The Family Man”

The greatest week of the year is upon us. At least for a Penn State fan that is. Ohio State comes to Happy Valley in a Big Ten East heavyweight bout that could have major College Football Playoff implications. The rivalry is a new one. One that players from both sides of the ball on Saturday have come to respect and cherish. As a die-hard Penn State fan, one of the greatest memories of my life was attending the 2016 OSU/PSU matchup at Beaver Stadium. White Out. 107,000 and change in attendance. My father to my left. My brother, a Penn State alumni to my right. At the time it felt like any other game. Close, but the #2 team in the country was keeping us at an arm’s length. Then the fourth quarter came. The rest lives in our memories, with the images, videos, and gifs of Grant Haley running back a blocked field goal late in the fourth 60 yards for a touchdown and cementing itself into Penn State history forever. That one game kicked off a glorious run to a Big10 championship that we won over a great Wisconsin team. Well wouldn’t it be lovely to live in that memory forever, but that was then and this is now. If you’re wondering why I’m not talking about our 2017 matchup please excuse me, I haven’t quite recovered from the devastation yet.

Such is this newfound rivalry, and the stage is set for another white-out game in Penn State. The city of State College swells to the third largest city in Pennsylvania, and college athletes leave everything out on the field for a chance at their own “Grant Haley moment”. 2018 Ohio State is nothing short of an offensive powerhouse. Scoring at will is an understatement. Coming out fast and hard is their forte. And they never take the foot off the gas. As a Penn State fan, Dwayne Haskins is in my top 3 for a Heisman nod as of now and they have equal talent on the other side of the ball. This team is one of the best teams I have seen Ohio State produce in their push for that elusive 6th National Championship bid. To the Ohio State fans reading this, let’s just be glad you don’t have J.T. Barrett steering your ship anymore. That man couldn’t win the big game if his life depended on it, kind of reminding me of a Donovan McNabb puking on the 50 yard line of the Super Bowl. You can tell us you were sick Donovan, but you’re just a turd in kelly green.

The 2018 Nittany Lion team can pretty much bet the house on this game. It is as must win as you can get. Penn State has been come to be known as a second half team. This is NOT the strategy to go into this rivalry game with. I repeat, NOT the strategy. This is not Kent State. This is not Illinois, coached by Lovey “White Beard” Smith. This game they will need to have laser like focus, along with on the balls of your feet play at all times. All while the sweet serenade of 108,000 PSU faithful singing Sweet Caroline cheer them on until to the inevitable field rush and goal post vandalism. Trace McSorley has rallied the offense on numerous occasions this year in typical gamer fashion. The headband and home run swing will be present on Saturday night, you can be sure of that. If there is one thing I have learned watching Trace, it is that he shows up for big games. Miles Sanders leads the rushing attack coming off a fourth quarter demolition of the Illini defense. A game in which he rushed for 200 yards on 22 carries and three scores. However, Ohio State has the edge of facing a ranked opponent before meeting with Penn State, even if I believe they exposed a lesser TCU team, who then proceeded to lose to Texas. Texas! 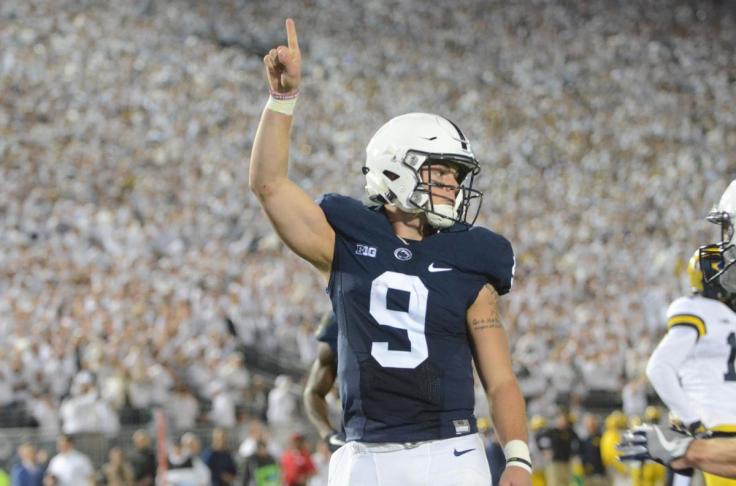 This Saturday some major questions are sure to be answered. Can the PSU defense dig deep enough to stop the high-powered OSU offense led by Haskins? Will OSU be able to handle the diversity of not being able to score at will? And let us not forget…will Projected top 3 NFL draft pick Nick Bosa’s absence be felt at the Ohio State defensive core. I’ll tell you what, I’m happy he is sidelined. One thing is for certain. Vegas opened up giving Penn State four points. They are rarely too far off. This game will be a close one. I just hope on Sunday I wake up to PSU Barstool videos of inebriated fans flipping cars and throwing kegs from 7th story windows in State college. The Family Man has spoken. We Are!!!…

The atmosphere of Happy Valley is a real thing. Since 2013, PSU has been home underdogs 6 times. They covered in four of those contests and won three of them outright.