Last night we watched a highly anticipated matchup of the most illustrious #12’s to ever play sports. Brady a 5x champ with all the accolades vs Rodgers the QB that was designed in a laboratory by aliens to come down to earth and perfect the craft, it was supposed to be a battle for the ages and only the second time these two great competitors had ever matched up. It could decide the faux debate of who really is the greatest? (It’s not really a debate). And with the late game heroics that both these stud QB’s are known for, you almost had to assume this game would come down to a last second drive to win the game…

It didn’t live up to the hype. The game wasn’t really about either QB. It was a complete team win for the Patriots with their defense really stepping up and limiting Rodgers to just 2 TD & 259 yds on 24/43 passing.  This game was more a microcosm of the classic saying that “if you put Rodgers on the Patriots with Belichick than he would have just as many rings”.  While I haven’t always bought into that argument because I think Brady is the best natural leader in the history of sports, I do think after watching last nights game you could make that argument and have some valid points.

First off, as we typically see in New England if you turn the ball over or make huge mistakes, you lose. Last night was no exception. We saw Aaron Jones fumble the ball on the first play of the 4th quarter and from there the Packers had sealed their fate. It was the type of play the Patriots always seem to make at home in Foxborough and rarely can an opponent overcome. Rodgers and the Packers were driving on that series for the go ahead score in a 17-17 game, but instead for the second time in 2 weeks the Packers took the ball out of Aaron Rodgers hands likely costing them a 2nd straight game. This play along with a stupid roughing the kicker call and an even dumber personal foul which resulted in ejection for Jermaine Whitehead were all prime examples of things that Aaron Rodgers can’t control and Tom Brady rarely has to deal with. It wasn’t just this game either, consistently over the years the Patriots have been the most disciplined team in the league, always ranking amongst the lowest penalized teams and best in turnover differential. Brady has some to do with that, but it starts at the top with Belichick.

Aaron Rodgers had to be staring across the field last night thinking what might have been if he had Belichick instead of the hopeless Mike McCarthy. Could he have 5 Super Bowls and not have to worry his team would blow it for him in the biggest moments? Would people think of him as the GOAT instead of justifying why he still might be with less rings? We will never know the answer to those questions and we likely will never even see those two matchup again with the Packers looking like a long shot to win the NFC anytime soon.

Brady and the Patriots on the other hand had a statement win last night, proving that their unbelievable run seems to just keep on going and going.. James White continues to be the MVP of this offense and Josh Gordon seems to slowly keep coming into his groove and getting better. Edelman hasn’t looked back to his normal self, and while he may never return to the 100 catch per year player we are used to he certainly needs to get his chemistry with Brady back to the near perfect level it was pre-injury. He has dropped more balls than I can ever remember in recent history and has had times where he has looked out of sync with Brady in terms of finding the pockets to sit down in while facing zone coverage. Hogan just needs to be better overall, when Gronk isn’t in the game which seems like an every other week occurence, it feels like Hogan is unable to make any sort of impact. That needs to change especially if Gronk is going to take more time than expected to return.

Brady didn’t have an amazing performance per usual played his best football in the 4th quarter. The ageless wonder seems to only grow stronger as the game progresses and seems to be getting a better feel for his weapons each week. That’s the scary part about this Patriots offense, they feel like they still haven’t put it all together yet. When they do look out NFL.

The defense looked much better to the relief of many fans who probably envisioned Rodgers shredding them for 4 quarters last night. Stephon Gilmore continues to prove why he deserves his salary and should be considered as one of the best shutdown corners in the game. I don’t think there is anyone better in the league right now at completely disregarding the need to look back at the football and instead get his hands in at the point of catch to break it up, all without drawing a PI penalty. It’s remarkable how he does it. The rest of the Patriots defensive backfield has looked much improved in their coverage of the deep ball. Tre Flowers continues to look like an all-pro caliber player and may possibly be the next great defensive player that Bill actually decides to pay to keep him in NE. 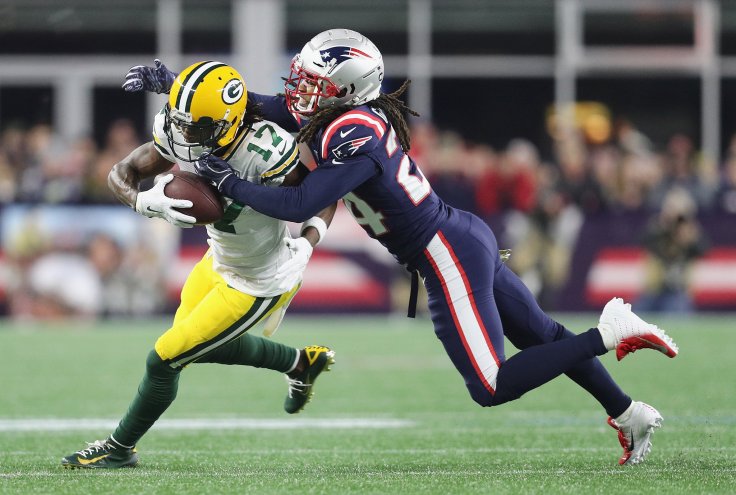 There is still a lot of football to be played this season, but the Patriots reassured the league of one thing last night. That it doesn’t matter who you your quarterback is, if you’re coming to Foxborough past November 1st be prepared to play a perfect game or you will not walk out with a victory.