As I’m sure you’ve heard over the course of this week, Tom Brady’s all time record in Miami is a pedestrian 7-9 over the course of his illustrious career. It has been a talking point of every major sports show and no doubt will influence many a gambler who will be looking to steal some money on this weeks Patriots v Dolphins game.

What I want to know is why though? Why is the greatest QB of all time who has a career 77 percent win percentage, suddenly a sub .500 quarterback when he enters the humid air of South Florida? Does he partake in strip clubs and cocaine the night before these games like the rest of us do on a trip to Miami? Is he partying on yachts with his supermodel wife Gisele? Was he attacked by the “Florida Man” once before and now has an irrational fear when he visits South Florida? All good questions but most likely not the answer.

Brady commented on his lack of success in Miami in his weekly interview with Westwood One’s Jim Gray. He stated that “I think the climate plays some role and they always seem to play well when they play us at home.” Both are probably true, but Brady went onto acknowledge that “We are not going to get beat by the weather. We are going to get beat by the Dolphins” and stated how the Patriots often beat them in Foxborough and its typical of this rivalry for the home team to play well. (This is true, the Dolphins haven’t won in New England since 2008)

But if it’s not the weather and it’s not the cocaine, what is the main reason the Patriots lack their typical success in Miami? Last year we saw Jay Cutler put down his cigarettes long enough to dismantle Brady and the boys in a 27-20 victory on Monday night football that wasn’t even as close as the score indicates. Brady threw two picks and the Hard Rock Stadium was certainly rockin. Kenyan Drake ran for 114 yds and had his fantasy owners delighted for once in their lives. That game was played at a similar time to this years game with it being on December 11th. As much as Miami is known for its heat and humidity by December the temp usually hovers between 70-80 degrees and much less humid, but with many more snowbirds. 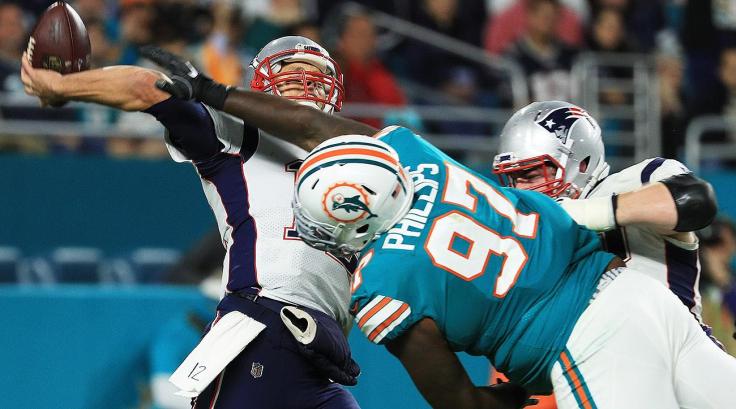 If I had to ponder an opinion on why we have seen Brady and the Patriots struggle so much in these games down in Miami it becomes very simple in my eyes. This is consistently the biggest game of the Dolphins season, in the eyes of not just their players and coaches but their fans as well. I’ve been to a game in Miami when the Patriots were in town and there is an extra feeling of importance to this matchup that is unlike any other game the Dolphins play. To sum it up, this is their Super Bowl. Every year they must watch the Patriots run away with the AFC East title, (a title they can clinch once again with a win on Sunday.) The Patriots are the big bad bully and a victory over them ensures at the very least, bragging rights for their players and fans alike.

And while this season like many others in recent memory will most likely not end well for the Dolphins and their fans, a win tomorrow will provide them with those sought after words for at least another season. “Hey, at least we beat Brady and the Patriots.”