Philly fans aren’t the only ones that view backup QB Nick Foles in a divine nature, apparently his teammates do too. As seen in the picture below, Eagle teammates Chris Long and Fletcher Cox had some fun installing a Shrine to Foles inside Cox’s locker.

Chris Long was overheard instructing Cox to light “The big ones. Don’t light the small ones. It’s important that you do it in that order.” Clearly in reference to the giant dong that Foles is so commonly adored for. In another possible penis size innuendo, Long went on to tell reporters “I know he’s going to show up big.”

If you’re a fan of any other team in the NFC and especially in the NFC East, this has got to have you shaking in your boots. Everyone thought they could write the Eagles off after a 29-23 defeat to the Cowboys on Sunday Night Football. But just like last year the “Big Dicked One” is coming for that ass and there seems to be nothing you can do about it.

The Foles vs Wentz debate has been all the rage this week in Philly, with most reasonable Eagles fans finding it a laughable argument and understand that Wentz is the long-term guy and you’re crazy for thinking otherwise.

Well I’m a little crazy, and I have an idea that will solve both sides of that argument. Let Wentz play games 1-14 every season and let Big Dick Nick pick up at week 15 into the playoffs. The injury prone Wentz only has to make it through 14 games a year and then Foles can work his magic down the stretch and into the playoffs. Problem solved. The only issue you’d need to worry about is rebuilding Broad Street after the Eagles fans burn it down every February.

So there you have it Philly, your savior has returned once again. If he can lead this team to another Super Bowl victory you can forget about making shrines to him, he better have a statue next to Rocky’s with the big dick to match. 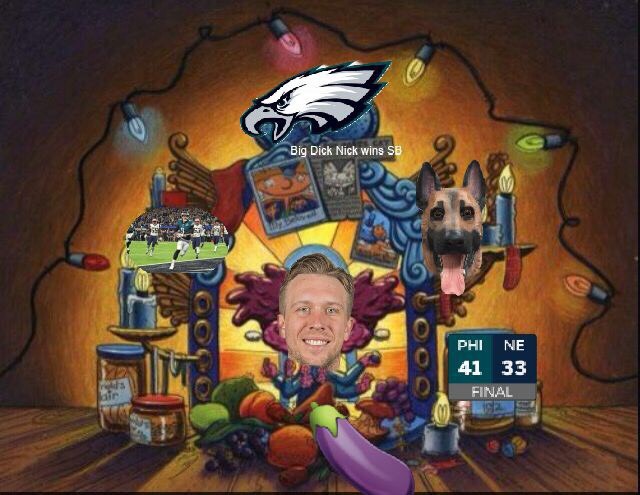